The book ‘Medical Computer Vision. Large Data in Medical Imaging’ is now available in Springer. You can find the online version at http://link.springer.com/openurl.asp?genre=issue&issn=0302-9743&volume=8331

This book constitutes the thoroughly refereed post-workshop proceedings of the Third International Workshop on Medical Computer Vision, MCV 2013, held in Nagoya, Japan, in September 2013 in conjunction with the 16th International Conference on Medical Image Computing and Computer-Assisted Intervention, MICCAI 2013. The 7 revised full papers and 12 poster papers presented were selected from 25 submissions. They have been organized in topical sections on registration and visualization, segmentation, detection and localization, and features and retrieval. In addition, the volume contains two invited papers describing segmentation task and data set of the VISCERAL benchmark challenge.

The results of the Khresmoi project were demonstrated to Commissioner Neelie Kroes, Vice-President of the European Commision, at the European Data Forum in Athens on the 19th of March 2014.

The latest video for the project KHRESMOI is now available.

Go to the link in YouTube to watch it:  https://www.youtube.com/watch?v=7Ve2VUGH9Tk&feature=youtu.be

The KHRESMOI project was presented at the CeBIT 2014 in Hannover, Germany.

More information about the project and the presentation at CeBIT, the world’s largest fair for information technology, is also mentioned in the MUW news website 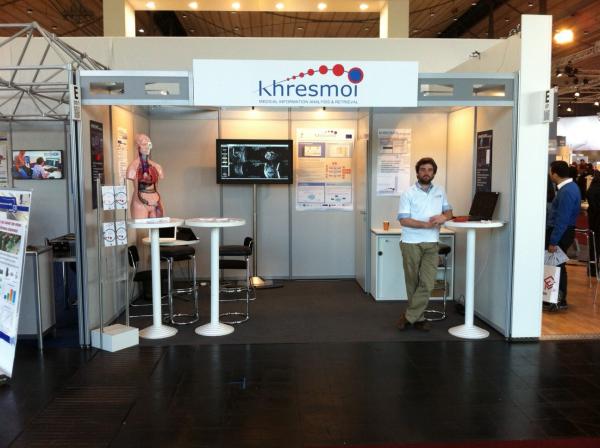 Yashin Dicente Cid just joined us as a PhD candidate on lung hypertension image analysis. Welcome to him!

The new Shambala interface is now publicly available at http://faster.hevs.ch:8080/shambala/

It includes image manipulation, modality classification and compound figure separation. Feel free to go ahead and try it.

The matlab code used in the TIP 2013 paper ‘Rotation-Covariant Texture Learning Using Steerable Riesz Wavelets’ is now available. The code and the paper can be found in http://publications.hevs.ch/index.php/publications/show/1373

of the obtained signatures allows verifying the visual relevance

of the learned concepts. Second, the local orientations of the

signatures are optimized to maximize their responses, which

is carried out analytically and can still be expressed as a

linear combination of the initial steerable Riesz templates. The

signatures is observed, which demonstrates that the instances

are projected into a feature space that leverages the local

reveals an average classification accuracies in the range of 97%

Contrib TC 00000 suite for even orders of the Riesz transform,

and suggests high robustness to changes in images orientation

and illumination. The proposed framework requires no arbitrary

choices of scales and directions and is expected to perform well

in a large range of computer vision applications.

The book will be published by Springer.

The Year One review of the project VISCERAL took place in Luxembourg, January 22nd.

The VISCERAL project passed its first year EU review as excellent. For more info about the project go to http://www.visceral.eu

The french journal Le Monde included in the article ‘Vers un big data européen de la santé’ a comment about the MD PAEDIGREE project in which HES-SO is participating.

This Intensive Program (Erasmus Lifelong Learning Programme 2014 in Ghent) has two main goals:
1. To develop creativity and autonomy thanks to an assisted “learning by doing” methodology.
2. To create 5 working innotative and interective HMI Prototypes at the end of the program, with the theme “The Internet of Things for Healthcare”, thanks to several focused workshops and to large periods of group work.
For more information go to http://laras.be/ip2014/

The International Conference on Artificial Intelligence and Soft Computing 2014 (ICAISC 2014) in Zakopane, Poland has invited Prof. Henning Müller as an invited speaker. The title of the talk is ‘Developments in medical image retrieval’. The Conference will take place from June 1-5, 2014.

For more information go to http://www.icaisc.eu/Invited_talks

For more information about the Khresmoi project go to http://www.khresmoi.eu

An article on Khresmoi Radiology has appeared in the magazine HealthManagement.org

More info about the project Khresmoi can be found at www.khresmoi.eu

The slides of the AMIA/ImageCLEF workshop in Washington taht took place on November 15 are now available at:

The MD-Paedigree booth at the ICT 2013 organized by the European Commision, won the prize for best booth at the event.

For more information about the MD-Paedigree project visit the website at http://www.md-paedigree.eu

Three–dimensional computerized characterization of biomedical solid textures is key to large–scale and high–throughput screening of imaging data. Such data increasingly become available in the clinical and research environments with an ever increasing spatial resolution. In this text we exhaustively analyze the state–of–the–art in 3–D biomedical texture analysis to identify the specific needs of the application domains and extract promising trends in image processing algorithms. The geometrical properties of biomedical textures are studied both in their natural space and on digitized lattices. It is found that most of the tissue types have strong multi–scale directional properties, that are well captured by imaging protocols with high resolutions and spherical spatial transfer functions. The information modeled by the various image processing techniques is analyzed and visualized by displaying their 3–D texture primitives. We demonstrate that non–convolutional approaches are expected to provide best results when the size of structures are inferior to five voxels. For larger structures, it is shown that only multi–scale directional convolutional approaches that are non–separable allow for an unbiased modeling of 3–D biomedical textures. With the increase of high–resolution isotropic imaging protocols in clinical routine and research, these models are expected to best leverage the wealth of 3–D biomedical texture analysis in the future. Future research directions and opportunities are proposed to efficiently model personalized image–based phenotypes of normal biomedical tissue and its alterations. The integration of the clinical and genomic context is expected to better explain the intra class variation of healthy biomedical textures. Using texture synthesis, this provides the exciting opportunity to simulate and visualize texture atlases of normal ageing process and disease progression for enhanced treatment planning and clinical care management.

The Medgift group had a segment in the canal 9 Valais news for it’s mobile image upload app: